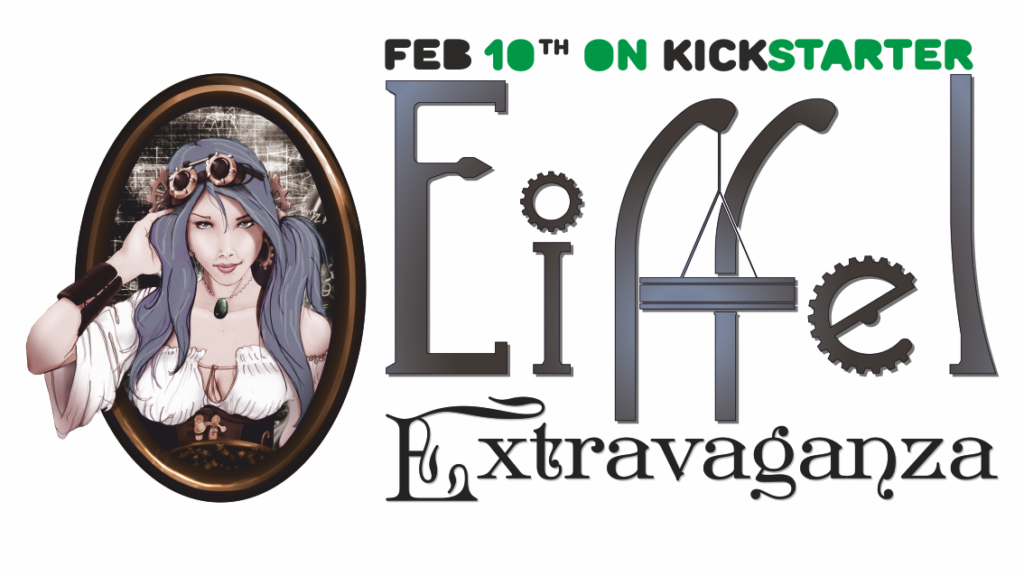 The cataclysmic chain of events which triggered The European Shadow War began with a single unshoot bullet in France in 1896, but not the France you know, and not the 1899 you are familiar with…

The Man stepped off the train in Gare du Nord station, and lit up a cigarette, its fumes rising to intermingle with the steam from the thirty other trains, and then escaping through the oppressively extravagant roof to join the 50,000 tons of soot suspended in the parisienne sky. It is said that if God decided to clean the sky one day, then every man, woman and child in Paris would be buried alive in a tomb of ash. “Perhaps that’s what we deserve” thought The Man.

“Your skis monsieur”, said the baggage boy handing over the tall, green bag.  The Man slipped the boy a few coins, then slid into the river of humanity coursing through the city.

25km away Amelie Eiffel strode into the Eiffel Industries headquarters like a queen entering her summer palace, a gaggle of attendants in tow. She ascended the steam elevator, which company workers referred to fearfully as the Stairway to Heaven, for at the top loomed the doors to the board room of the most powerful corporation in the entire French Empire. The steel doors were flung open, and Amelie waited just long enough for her courtiers to stand before saying “Don’t get up Gentlemen” with a modesty as fake as a two-franc note.

“Monsieur Gonadì, are we on schedule for the opening?” she barked.

The venerable man surrounded by clerks smiled and replied “Almost Mademoiselle” as if he were addressing his naughty granddaughter. There was an uncomfortable silence in which the board members studied the grain of the table.

“Monsieur Gonadì would you like to…almost have a job next week?”

“It is my pleasure to serve you as I have always served your uncle Mademoiselle”, the elderly man replied with a gracious bow.

Amelie rolled her eyes and sighed, “Wake up gentlemen, did my uncle not retire five years ago, and since then have I not turned Eiffel Building Company into the biggest multiservice manufactorium of the entire world, providing food, steam, electricity, mass transit and education to the peasants of our beautiful country?”

Amelie clicked her fingers, “Claude see to it.” Tall and thin, Claude de la Rougertain, was glad to be Amelie Eiffel’s Grand Engineering Master, it allowed him the latitude to indulge every eccentric idea in his giant intellect, and it freed him from the burden of morality and consequences. It’s not that Monsieur Rougertain was an evil man, he simply lacked empathy with living things. Respected the world over, and hated by all Eiffel employees, Rougertain held the distinction of having laid-off 10,000 people in one year through the introduction of the world’s first assembly-line with the Automatic Steam Riveting RobOT (ASRROT) – but more commonly referred to as ass-rot.

Monsieur Rougertain descended into the bowels of the heaving, hissing Floyd Factory until he and his assistants reached the new pump room. Had he been a people-person, he might have recognized his former Personal Assistant Anne Coséte. Wearing overalls and cap and camouflaged with oil, she passed undetected among the grease-monkeys of Eiffel Corp. Anne looked in pity at the adoration on the faces of her colleagues as Monsieur Ass-Rot passed. These people thought their lives were improved. True they had good wages, and they had prestige, but in response to Amelie Eiffel’s Philanthropic megalomania, Middle Management at Eiffel Industries had in recent years installed a system of terror to make workers perform their jobs at 150% in order to cover their own incompetence. Working hours grew longer and longer, stress multiplied, and industrial accidents became commonplace, as did verbal and psychological harassment.

Some disgruntled workers had started to identify their managers as “les nobles” – the new noble class. “And we all know what Madame Guillotine did to the last lot”, mused Anne to herself.

This time, when Brutal Oppression was thrown together with Resentful Injustice, the two had conceived a child together – La Résistance. Insiders and ex-workers hatched plots to sabotage Eiffel Industries, its projects and its technologies. Having been falsely fired, Anne Coséte had risen within the resistance to become a feared commander. She had infiltrated her previous employer in order to discover for the Resistance the identity of “Monsieur Labmasu”. His real name was unknown and his face was necessarily masked, because being the Vice President of Production at Eiffel Industries, he was the one who signed all dismissal orders.

Anne Coséte put down her tools and stalked away. She descended several steel staircases to the sub-basement, and from there entered a network of under-tunnels, then opened a panel and crawled into the service conduits which ran between the 30ft diameter steam pipes. She knew that if any of the valves or gaskets failed, she would be instantly poached like an egg. After crawling 100 meters, she almost fell head-first into the rough-cut hole before she saw it. She rapped on the ladder 5 times with a spanner. The man climbed out, carrying his bag.

Using maintenance shafts they ascended, to the roof structure above the grand Hall of the Floyd Steam factory.  Today would be the opening of Mademoiselle Eiffel’s newest folly, which hundreds of workers had died to realise. The Man was said to be the best assassin in Europe, a professional who had learned his trade on the battlefields of Yorktown, Lexington and Gettysburg.

Today would be a good day, for today, Rougertain the soulless would die.  As Anne and The Man entered the gantry, a dark figure stepped out of the shadows. She wore a cloak and black mask, and she was obviously a problem. Anne Coséte drew her revolver.

“Really Anne? Will you shoot me and alert the crowd that you are up here with an assassin’s rifle?”

“Who are you?  How do you know my name?” Anne demanded.

“It does not matter who I am, what matters who I represent”.
“Uh! Pardonnez my rogue attitude! Bienvenue à Paris Mr Luke Threepeppers, or better “Nitro”.”  The Man froze; for his real name was a very close secret.

The lady in black was known as “The Scarab”.  Madame Diane Breuil, is an archaeologist, but now, beside her brilliant carreer she was a leading spy for “Société de Archaeotech”. This group had been formed by elements of several European governments in order to steal technology, lest the entire world fall too far behind the Eiffel Corporation. It was rumoured that its leader was Charles Babbage – the inventor of the Astronumerator – a mechanical computer the size of a large village. Diane Breuil had spent months infiltrating the engineering department of Eiffel Industries to gather secret technology. And now she spoke, “I represent the wishes of la Société. I am the tip of its sword.”

Anne Coséte had heard of her. “The Scarab.  And what is it you want here Scarab?”

“We know you plan to kill Rougertain, but we need him alive for another two weeks. After that you can have him,” replied Diane.

“Not acceptable. He dies today, and so do you if you stand in the way of destiny”.

“Understand that he is very close to completing a major discovery, and we are poised to take this information before Eiffel Industries can use it.  Have you heard of the Radium Battery?”

“No, Rougertain has gone a step further, he has cracked how to use the radiation to create electricity. This could be the dawn of a new Tech-age, and it could be used to rebalance the powers of Europe.” Said Diane.

Anne was unimpressed. “I have my orders, and you fools have accomplished nothing in the last decade,” replied Anne. “Only the Resistance has done anything to undermine the evil of Eiffel. So you can ask all your engineering questions to his dead corpse”.

“Just leave him alive for 2 weeks! S’il vous plaît…” said Diane, “and we will provide you weapons and funds to achieve your goals. In the meantime, to hurt the company, take down Gonadì. He is the weakest link in the chain. He is an incompetent fool who sacrificed dozens of careers to get himself where he is, and created an atmosphere of terror within the company to mask his uselessness. If you want to hurt him, steal his latest project and leak it to the press.  His paranoia and insanity together with Amelie Eiffel will do the rest. How much more satisfying to watch the dogs turn on each other!”

As Rougertain and Amelie arrived on stage to open their new venture, Anne Coséte and the Scarab drew daggers on the scaffolds above.

Amelie Eiffel addressed the crow, “Ladies and gentlemen, it is my great honor to be here today to open the Parrier Pipeline – A ground-breaking wonder of science, a giant water channel bringing natural sparkling spring water all the way from the Alps to the hovels of Paris!” the crowd burst into cheers “Amelie, Amelie, Amelie!”.